Editor’s note: Over the past decade, China has made great accomplishments while navigating through a tumultuous global environment. As the 20th Communist Party of China National Congress approaches, CGTN First Voice has prepared a ten-part series titled “The China Path: A Panoramic Decoding” to take you through the landmarks and watershed events over the past ten years and decode the secret of China’s development. This is part four of the series, focusing on the rule of law in China’s governance.

During the Warring States Period, the state of Qin lagged behind the vassal states in Central China politically, economically and culturally. Yet, this did not stop Qin from conquering the other six major states and unifying the whole country.

One of the major factors underlying the emergence of Qin was the “rule of law.” Among many well-known stories about Qin, one related to a politician named Shang Yang.

Shang Yang drafted a reform decree but worried that people would not follow it. Accordingly, he erected a 10-meter-tall wooden pole at the south gate of Qin’s capital city and placed a notice announcing that anyone who could move the pole to the north gate would be rewarded with 10 gold pieces. No one believed it until the reward was increased to 50 gold pieces. A man fulfilled the task and was rewarded. This helped build trust among the people, establishing the authority of the decree, and paving the way for legal reforms initiated by Shang Yang that had led to the prosperity of the Qin state.

Therefore, the rule of law cannot be overstated, as well as serving as a crucial component behind China’s rapid rise in recent decades.

In November 2012, Chinese President Xi Jinping said that national rejuvenation has been the greatest dream of the Chinese people since modern times began. The Chinese dream cannot be realized without institution building and rule of law. When the rule of law prevails, China will prosper; when it weakens, the country will be jeopardized.

After the 18th National Congress of the Communist Party of China (CPC), socialism with Chinese characteristics entered a new era. The law-based governance has developed to a new stage in all fields. To understand China’s rule of law, one must understand its guiding principles, along with whose leadership it follows and whom it serves.

The central government holds high the banner of Chinese Marxist theories of law and is guided by the Xi Jinping Thought on the Rule of Law. President Xi said that we must follow the right path or otherwise all the measures would no longer make sense. 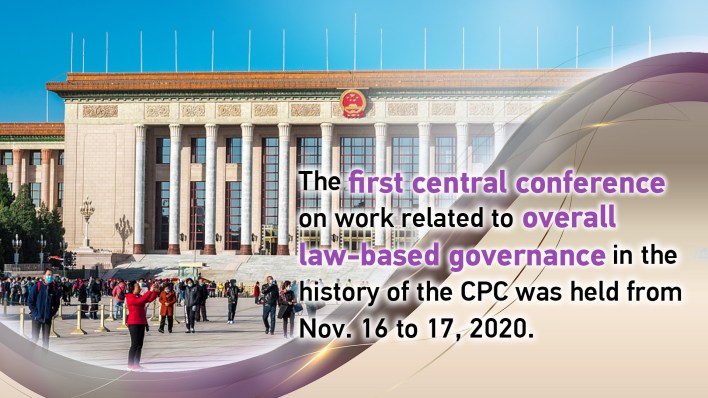 China’s development on the rule of law is different from that in the West. At the heart of the path of socialist rule of law with Chinese characteristics is the leadership of the CPC, serving as the anchor.

Some Western media outlets have continued to demonize the CPC. In China, the Party’s leadership and socialist rule of law remain compatible with each other. The latter is premised on the former, so the question “Which has more power, the Party or the Law?” acts as a political trap and pseudo proposition, since only in a law-based governance system led by the Party can the Chinese become the real masters of their beloved homeland.

China’s rule of law differs from the “separation of powers” in the West. In China, national power is the prerequisite for the rule of law and a powerful law-based government can be trusted by the people. Although in some other developing countries, inadequacies in national power have led to disastrous consequences for their respective citizens. China’s experience has demonstrated that without the CPC’s firm leadership, steady development of the rule of law would be impossible.

For leaders and cadres at different levels in the Party and political organs, however, “Which has more power, the Party or the Law?” is not a pseudo proposition. Power is a double-edged sword that if wielded within the framework of the rule of law, could serve the interests of the people, but might be a scourge for the country and its people.

Hence, efforts should be made to improve implementation of the Party-led rule of law in all fields, consolidating Party-led legislation, ensuring enforcement of the law, supporting the judiciary, encouraging Party members to take the lead in observing the law, to promote the institutionalization and reinforcing the law-based nature of the Party’s leadership, and ensuring effective implementation of the Party’s principles and policies. 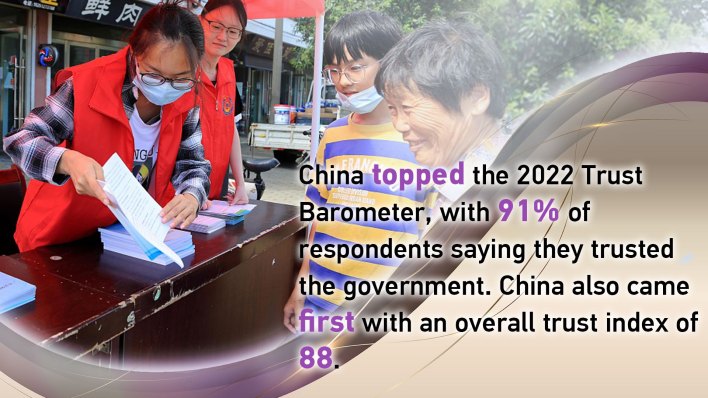 In accordance with the 18th National Congress of the CPC, the CPC Central Committee, with President Xi at its core, has held fast to people-centered rule of law. The rule of law in all fields draws its strength and broadest support from the people. Relevant measures must reflect the aspirations of the people, safeguard the people’s rights, as well as promote the people’s wellbeing.

As the Party has consolidated its leadership over the country, it has maintained the people’s support. From Mao Zedong’s “serve the people” to Xi Jinping’s “put people first,” these are the main principles guiding the development of rule of law in China standing at the root of China’s success.

According to the 2022 Trust Barometer released by Edelman, one of the world’s largest public relations and marketing consultancy firms, China yet again topped the list of trust among citizens in their government with an astonishing 91 percent of respondents saying they trusted the government, registering a year-on-year increase of nine percent and hitting a ten-year high. China also came first with an overall trust index of 88, up by 11 points as compared to last year.

People’s trust is what underpins the development of the rule of law in China. It is also the key to the country’s rapid rise within the past few decades.

Zhu Jingwen is a consultant of the Jurisprudence Institute of Law, and Institute of Legislation at the China Law Society, and director of the Renmin University of China Center on Law and Globalization.