By He Juan, People’s Daily

Nestled beside precipice and above abyss, it has dozens of 180-degree turns, which look like knots on a map.

The winding mountain road has made it easier for residents to go to other places for education, business and work, and for local pomegranates, walnuts, apples and other agricultural products to be sold to other regions, and attracted an increasing number of tourists to Dobbar, leading residents in the remote township to prosperity and happiness.

Transportation is without doubt one of the most important aspects of infrastructure. Poor transportation leads to poverty; only when it is improved can people march toward prosperity.

In many remote regions, where development could be hindered by a mountain or a river, building a road in mountains or turning a zipline across a river into bridge can help open a door to prosperity for local people. 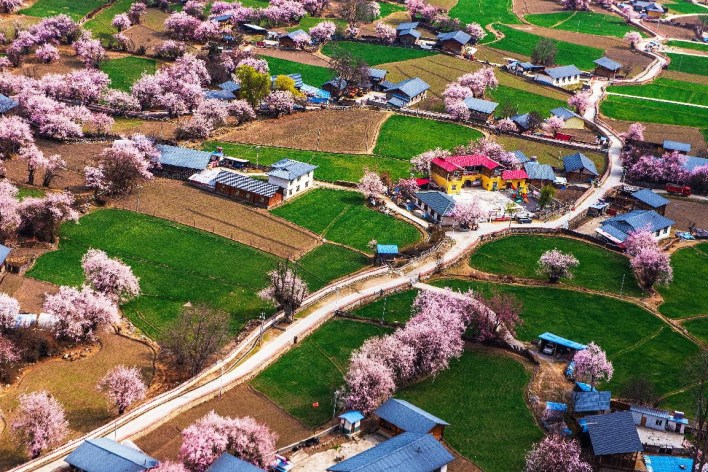 Walking along the Lancang River, which flows through the Qinghai-Tibet Plateau, a person may marvel at the craftsmanship of nature embodied in the magnificent scenery. More importantly, he or she can be impressed by the zigzag pathways along the river.

Building roads on the Qinghai-Tibet Plateau is anything but easy. Not only is it faced with disadvantages such as short construction period, cold weather, hypoxia and fragile ecology, but it requires dealing with technical difficulties and high costs brought by complex terrain, geology and climate conditions.

China’s National Highway 214 (G214), which crosses the Lancang River for multiple times, serves as an important link among the country’s Qinghai province, Tibet, and Yunnan province.

To improve transportation requires building both arterial roads and country lanes that connect villages with the outside world. Rural roads, which extend across the countryside like capillaries, directly concern people’s traveling.

In recent years, areas along the Lancang River have actively built and renovated roads and strengthened the operation, management and protection of rural roads. The G214 highway is now connected with many country lanes, some of which lead directly to villages.

Many ziplines across the Lancang River have been turned into bridges, helping local people bid farewell to the old days when they had to depend on ziplines to cross the river. 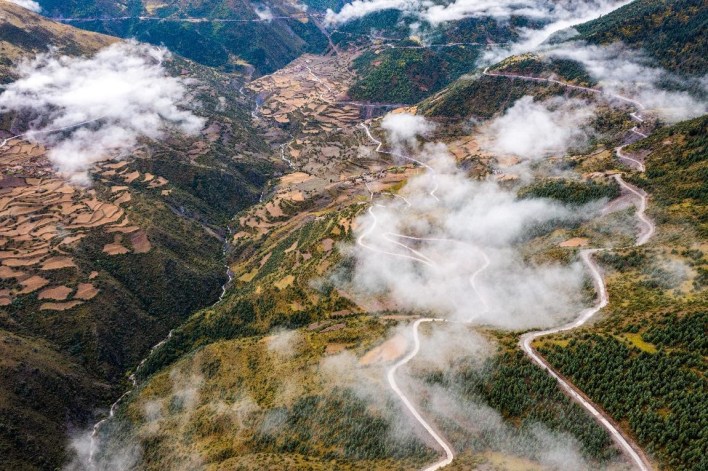 Arterial roads and country lanes have formed a close-knit network, making it more convenient for residents to travel and fueling the economic and social development of regions involved.

Decent roads have propelled the development of industries. Jitang township, Chamdo city, Tibet, situated near G214, has made use of its geographic advantages to develop itself into a characteristic town featuring leisure tourism that integrates hot spring recreation, ecological agriculture and forestry as well as folk custom experience, attracting a steady stream of visitors and helping local people become better-off.

A sound transportation network is essential for cultivating characteristic industries and stimulating rural tourism. Facts have proved that a flat and smooth road can not only bring visitors and wealth to a region, but also continuously inject momentum into the vitalization of villages.

Roads built on the plateau have also been continuously improved to better benefit people. The road to Zhuka village, Markam county, Tibet, is filled with U-shaped turns intertwined with steep slopes. Near Jueba mountain along the road, a large bridge spans above a chasm. One end of the bridge is linked with an extra-long tunnel that has recently been holed through.

After the tunnel is put into operation, vehicles will be able to pass through it in merely 10 minutes. Besides, the journey to Zhuka village will be cut by 19 kilometers for vehicles and the drive time will be reduced by over one hour. “The bridge and the tunnel have significantly made our traveling easier,” a local resident said.

From dirt roads and gravel roads to cement and asphalt ones, from tunnels that pass through mountains to modern bridges that turn deep chasms into thoroughfares, the continuously improving traffic conditions have witnessed how rural roads have been built and then improved as well as how people of all ethnic groups along rivers on the Qinghai-Tibet Plateau step steadily toward a better life.