Editor’s note: Over the past decade, China has made great accomplishments while navigating through a tumultuous global environment. As the 20th Communist Party of China National Congress approaches, CGTN First Voice has prepared a 10-part series titled “The China Path: A Panoramic Decoding” to take you through the landmarks and watershed events over the past 10 years and decode the secret of China’s development. This is Part Nine, focusing on China’s efforts to achieve common prosperity.

By 2021, 98.99 million Chinese improvised rural residents were lifted above the current poverty line. Accordingly, all Chinese, including the low-income rural population, had benefited from the fruits of the country’s development. Meanwhile, the moderately prosperous society had been built in all aspects; and “no one was left behind” serves as a landmark achievement. The CPC Central Committee, with Comrade Xi Jinping at its core, has made historic achievements in eradicating absolute poverty, a problem that had plagued the Chinese for thousands of years, and pushed ahead on significant contributions to global poverty reduction.

How did China make history by creating this miracle?

Smile returns to the face of the Blang family

Zhang Yuanxiang, a 35-year-old woman of the Blang ethnicity from southwest China’s Yunnan Province, lives happily with her husband and two children. While her husband works near home, she runs a small shop in the village, offering convenience for villagers and helping with the family budget, and their children go to local schools. Zhang feels content. It is difficult to imagine that just three or four years ago, she was struggling in hardships.

Zhang had suffered from hip-joint problems since childhood but did not receive proper treatment. Growing up, she envied her friends who could run and play. As she grew up, the pain affected her normal life and crippled her mobility. Although she wanted to get treatment, she understood that her husband’s meager income could barely support the family.

When poverty relief officials learned of Zhang’s story, they visited her home, explained national healthcare assistance policies and encouraged her to receive medical treatment as soon as possible. After a hip surgery, Zhang made a full recovery. Her total treatment cost was 67,050.82 yuan, of which 60,354.73 yuan was covered by national medical insurance. Zhang only paid 6,705.09 yuan. Then, an additional 1882.04 yuan was covered by the Backbone Project – Health Insurance for Poor Families’ Labors initiated by the China Foundation for Poverty Alleviation (CFPA). It further lightened her financial burden. 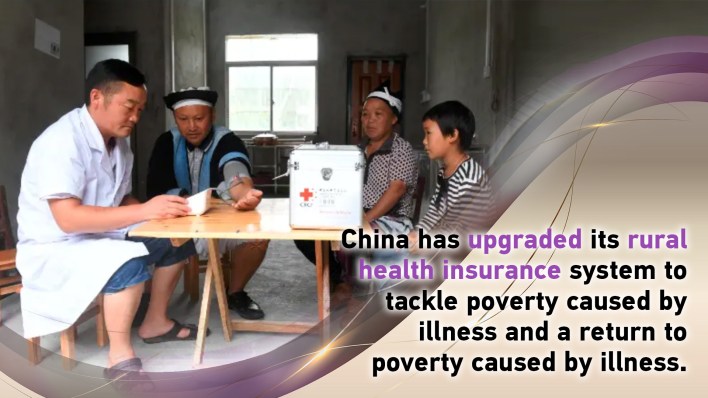 After securing a victory in eradicating absolute poverty in 2021, the Chinese government announced that the following five years would be a period to consolidate poverty elimination and link them with rural vitalization. Pledges were made to create the world’s largest rural healthcare insurance system and to provide all Chinese with adequate access to medical resources. 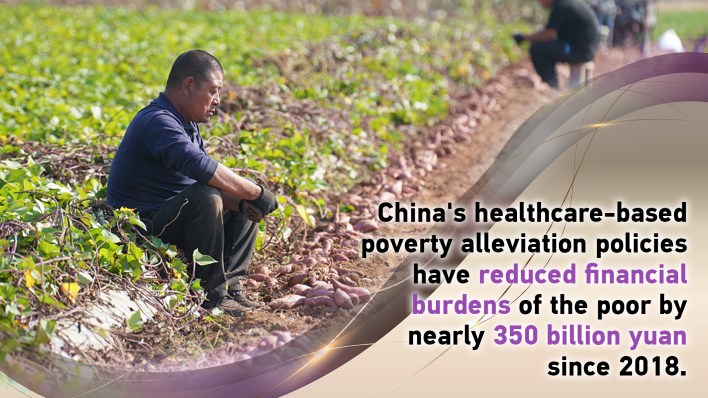 The rebirth of a village

A clean tarmac road runs through the village. Well-spaced houses built along the hillside are surrounded by trees. Chickens and ducks cluck in the shade. Next to the houses, a garden grows fruits and vegetables. Small squirrels run by every now and then. Villagers sit leisurely in front of their homes chatting. Wind chimes hanging from the eaves sway and tintinnabulate in the breeze. The peace and tranquility of the village attracts urban visitors who enjoy the slow living and nostalgic sentiments in the countryside.

This beautiful mountain village named Nanyu Village is located in Laishui County of Hebei Province. Although adjacent to the Yesanpo National Park, a popular scenic spot, and only a 2.5-hour drive away from Beijing, the village was impoverished eight years ago with most residents living far away to earn a living elsewhere. In 2016, the CFPA and People’s Government of Laishui County has developed rural tourism, which was what the villagers wished for. A group of travel industry professionals was planning: vacant houses to convert into bed and breakfasts (B&B), and abandoned sheepfolds were turned into cafes. The villagers were mobilized to improve its living conditions and candidates were selected to set up a professional tourism cooperative.

Nanyu village quickly transformed into a beautiful tourist destination that has attracted many urban tourists nationwide. Seeing business opportunities in tourism, those who previously left for work returned and turned their vacant houses into tourist residences and restaurants. Nanyu Village now has 46 courtyard accommodation blocks with over 500 rooms. With more than 30,000 tourists visiting the village annually, its rural tourism industry has created over 100 jobs and generates total annual income of 3.65 million yuan for the village. Villagers have earned over 6 million yuan each year from privately-run B&B accommodations. From 2014 to 2021, Nanyu’s per capita annual income soared from 2,000 yuan to 12,000 yuan. Since employment opportunities are just at the doorstep, the permanent population of the village has surged from 150 in 2014 to over 500 at present. With the return of young people, social problems such as the “left-behind children” and “empty-nest elderly” are solved. Villagers feel confident for a brighter future. 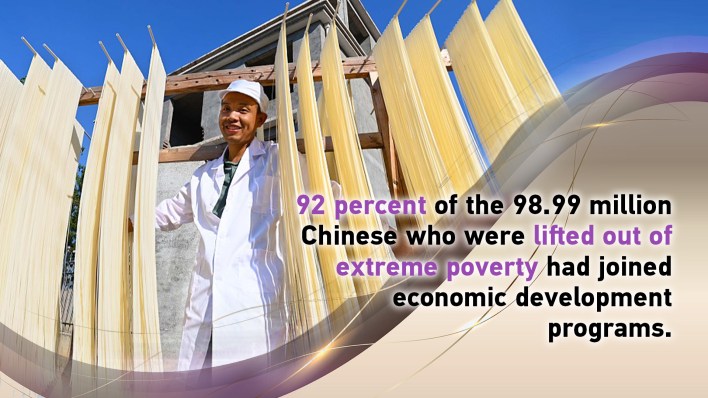 Chinese President Xi Jinping once said that business development was the fundamental approach to sustainable poverty alleviation and a long-term method to empower poor areas for independent development and help the impoverished get employed locally. The transformation of Nanyu Village serves as a model for China’s 128,000 other poor villages getting lifted out of poverty through local business development. Beijing supported each of these villages to boost economic activities geared to their geographical situations, available resources and advantages, such as fruit cultivation, beef rearing, rural tourism, photovoltaic power stations for poverty alleviation, and garment processing.

According to Liu Yongfu, former Director of State Council Leading Group Office of Poverty Alleviation and Development, among the 98.99 million Chinese living in poverty, 92 percent have joined economic development programs the past few years, and more than two thirds of poor households have benefited from their close ties with new types of business entities. With governments at all levels investing more than 1 trillion yuan in developing local industries, many poor villages and counties have made an extraordinary leap from having no local industries to enjoying much more prosperity. The capacity of officials and people in poverty-stricken areas has been improved. All of this has laid a solid foundation for China’s efforts to build a moderately prosperous society in all respects and achieving all-round rural vitalization.

In the past ten years, China’s achievements in the construction of people’s livelihood are historical and comprehensive. Nonetheless, shaking off poverty is not the finish line, but the starting point of a new life and new endeavors. On the way to common prosperity, no single person would get left behind.