Deputies to the 13th National People’s Congress (NPC), China’s top legislature, submitted a total of 487 motions by noon on March 8, the deadline for the submission of motions during the fifth session of the 13th NPC set by the presidium of the session, according to the secretariat of the session.

The secretariat has received about 8,000 pieces of suggestions and criticisms from national lawmakers during this year’s annual session of the NPC, which was held from March 5 to 11 in Beijing.

It has supported and encouraged lawmakers to enhance ties with the people and better understand social conditions and public opinions by carrying out such activities as investigations, inspections, field surveys, discussions and activities held by lawmakers’ groups, and making good use of multiple platforms established to facilitate interaction between legislators and citizens, including local legislators’ liaison stations and grassroots-level contact stations, Guo said.

By facilitating the communication between deputies and the people, the NPC Standing Committee tries to improve the quality of lawmakers’ proposals and motions, ensure efficient handling of them, and bring into full play the role of lawmakers in the country’s whole-process people’s democracy, he added.

Among the 487 motions submitted by national lawmakers during this year’s annual session of the NPC, 474 are related to the making and amending of laws.

Some motions call on the national legislature to formulate laws on public health emergency response, food security, and energy, as well as laws that promote the realization of China’s goal of peaking carbon dioxide and achieving carbon neutrality and the sound development of digital economy, big data, social credit, etc.

Focusing on responding to the concerns and aspirations of the people and improving the country’s legal system to satisfy the people’s expectations for a high-quality life, some motions highlight the necessity of introducing new laws on preschool education, social aid, anti-telecom and online fraud, childcare and elderly care services, as well as revising the laws on vocational education and the Law on the Protection of the Rights and Interests of Women, aiming to solve prominent problems concerning people’s wellbeing that have been frequently complained by the people.

Based on a good grasp of the priorities and annual legislation work plan of the NPC Standing Committee, a good number of motions are designed to help speed up legislation while ensuring the quality of relevant work. Deputies proposed making new laws on rural collective economic organizations, compulsory execution of civil judgment, and protection of fertile black soil, as well as revising such laws as the Company Law, Anti-monopoly Law, Enterprise Bankruptcy Law, and law on penalties for administration of public security. Formulation and revision of these laws have all been listed among this year’s key tasks of the NPC Standing Committee. 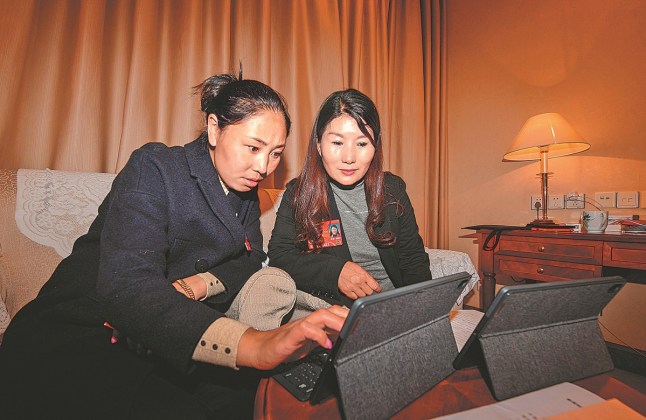 NPC deputies have also submitted motions for revising the Criminal Law and starting the compilation of statute book for fields with the right conditions.

According to Guo, many national lawmakers have put forward proposals for such issues as further implementing major regional development strategies to promote integrated regional development, consolidating and expanding the results of poverty alleviation and boosting comprehensive rural vitalization, accelerating the transformation of government functions and fostering a business environment that is based on market principles, governed by law and up to international standards, raising capacity for pursuing scientific and technological innovation and improving the core competitiveness of manufacturing, facilitating steady and sound development of the digital economy, advancing the construction of high-standard farmland and ensuring food security and the supply of agricultural products, strengthening comprehensive treatment of ecological environment and putting into practice the action plan for peaking carbon emissions, further easing the burden of excessive homework and off-campus tutoring for students undergoing compulsory education and promoting healthy development of vocational education, improving medical service capacity and the system of real-time settlement of patient’s medical expenses for treatment incurred outside the administrative area of insurance registration, cracking down on the trafficking of women and children, as well as speeding up legislation in key fields and intensifying efforts to build a government based on the rule of law.

The secretariat has been working hard to carefully sort and analyze the motions submitted by national lawmakers, submitted reports with proposed solutions to the presidium of the session for deliberation, and given written feedback on the deliberations on motions to delegations and heads of groups of NPC deputies that submitted motions during the session.

After careful deliberations, relevant special committees of the NPC will report the results of deliberations on motions submitted by national lawmakers to the NPC Standing Committee within this year in accordance with the law.

Strictly Necessary Cookie should be enabled at all times so that we can save your preferences for cookie settings.

If you disable this cookie, we will not be able to save your preferences. This means that every time you visit this website you will need to enable or disable cookies again.